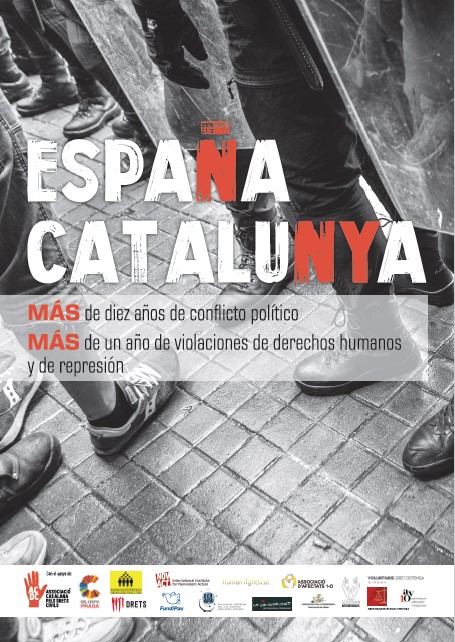 The report “España Catalunya, More than ten years of political conflict. More than a year of violations of rights and repression ”responds to an exceptional moment, that of the beginning of the oral trial to the Supreme Court of the Kingdom of Spain. A trial of the Vice-President of the Government of the Generalitat de Catalunya, nine councilors and the President of the Parliament of Catalonia, dismissed by the Spanish government after a political authorization from the Senate with dubious constitutional and statutory legitimacy, (and, in which considers situation of exile, of the President of the Generalitat, four councilors and two deputies of the Parliament of Catalonia). This trial, which has included the presidents of two civil society organizations in prison for more than a year, is the tip of the iceberg of a huge bloc of political and legal actions in Catalonia and Spain in recent years, and have aroused great interest at all levels, both nationally and internationally.

The purpose of this report is not to analyze or take a position on the question of the possible independence of Catalonia. This report focuses on an analysis of the violation of human rights of individuals and groups in Catalonia and the rest of Spain, according to the international treaties of a universal and European nature, of which the Kingdom of Spain is a party. integral, and, that according to the Spanish Constitution are executive because they form part of his internal juridical ordering.

The United Nations High Commissioner for Human Rights in his speech on March 7, 2018, before the representatives of the states of the world present at the UN Human Rights Council, including Spain, referred to the violence carried out during the referendum of 1 October 2017 in Catalonia, questioning the proportional use of force by the security forces and bodies of the Spanish State, and also recalled that provisional imprisonment must be the last resort. He also called for resolving this situation through political dialogue. It is precisely these words of the UN High Commissioner that serve as a frame of reference throughout the report.

Precisely to facilitate the understanding of human rights violations, the report begins with a brief approach to more than ten years of political conflict, with special attention to international readers.

The Kingdom of Spain, repeatedly ignoring the recommendations of international bodies, the UN High Commissioner for Human Rights, the UN Human Rights Committee, and several UN Special Rapporteurs , the Commissioner for Human Rights of the Council of Europe, the European Court of Human Rights and numerous human rights organizations and national and international experts, has managed this conflict with executive and judicial legislative measures that violate civil and political rights. This has led, according to experts, to a “de facto” situation of widespread repression in which methods typical of the lawfare and the criminal law of the enemy have been applied, breaking the principles of minimum intervention of criminal law and ” last ratio ”facts that involve the limitation of rights“ de facto ”against people considered ideologically adversaries, and a brief crack at the rule of law and the separation of powers inherent in democracies.

It resolves resolutions and decisions of all bodies of the factual powers that sustain the state, as well as judicial decisions of other courts at the national and international levels, and recommendations for reports of various UN mechanisms of the Councils of Europe … With details of all sources of documentation and information, including legal experts, defense lawyers, and prosecution of the various causes, victims of police assaults, representatives of victims’ associations, politicians, political scientists, NGOs specialized in human rights, diplomatic representatives, senior officials of various public bodies, journalists, special rapporteurs and UN experts, among others, and have also taken into account the various public written and oral statements that the Catalan Association for Civil Rights has done during 2018 in the 38th and 39th Session of the UN Human Rights Council.